Vancouver, British Columbia--(Newsfile Corp. - November 22, 2022) - Tower Resources Ltd. (TSXV: TWR) ("Tower" or the "Company") is pleased to report the results of follow-up till sampling performed recently on the new, high-grade Central gold grain dispersal train (see Tower's October 5, 2022 press release) 400 m west of the Lightning Zone on the Company's Rabbit North property near Kamloops, British Columbia, between New Gold's New Afton underground Cu-Au mine and Teck's Highland Valley open pit Cu-Mo mine (see Fig. 1). The new sampling confirmed the high grade of the Central Train and traced the train up-ice to its source area in preparation for an initial diamond drill test that Tower plans to conduct prior to the next expansion drilling campaign on the Lightning Zone due to the long delay in receiving assays from the August-September drilling program on this zone.

In mid-October Tower collected 17 additional samples near the three discovery samples (Nos. 096, 245 and 246; see Fig. 2). The new samples were positioned to:

The 17 new till samples yielded from 40 to 452 gold grains (see Fig. 2). Most of the samples are as anomalous as those collected from the Dominic Lake Train that emanates from the Lightning zone and led to its discovery (see Tower's January 11, 2022 press release), confirming that the Central Train is a very significant train.

The concentration of gold grains is highest in the 150 m long segment of the train between the discovery samples and cover basalt flows. It is still elevated at 116 grains on the southern edge of the basalt, as originally mapped from scattered outcrops, suggesting that the actual basalt contact may be farther north. The anomaly intensity in this segment of the train does vary considerably but such variability is normal in source-proximal till samples due to the significant Au grade zoning that characterizes gold deposits. Further down-ice, the gold grain counts decrease systematically toward the Au-in-soil anomaly.

As explained in Tower's October 5, 2022 press release and clearly demonstrated therein by the similar Au grades of the Dominic Lake Train and its Lightning Zone source, the Au grade of the heavy mineral fraction of the till where the gold grains reside, calculated from the number of grains recovered from a sample and the measured dimensions of these grains, is predictive of the grade of the bedrock source from which the grains are derived, provided that the grade is normalized to the average 0.4% (1 particle in 250) heavy mineral content of till in Canada.

The Central dispersal train defined by the normalized Au grades of the heavy mineral fraction of the new samples (see Fig. 3) is shorter than but slightly wider than the train defined by the number of gold grains in the samples (see Fig. 2). As with the gold grains, the Au grades of the till samples near the head of the train vary considerably, suggesting that significant Au grade zoning will be present in the gold zone from which the gold grains are sourced.

While the follow-up till sampling confirmed and adequately delineated the Central Train, it did not establish whether the gold zone from which the train is derived strikes east-northeast and is mostly covered by the young basalt flows or strikes south-southeast parallel to the Lightning Zone and directly underlies the train. Nevertheless, because the head of the train is well defined, a 150-200 m long, southwest-directed drill hole collared on the basalt should intersect the zone.

Tower plans to drill the inaugural hole on the Central Train, and possibly others nearby, prior to the next expansion drilling campaign on the Lightning Zone due to the long delay in receiving assays from the August-September drilling program on this zone. The drill area is readily accessible by road from Kamloops year-round.

Overburden Drilling Management Ltd. (ODM) collected the till samples and processed them at the company's heavy indicator mineral laboratory in Ottawa, Ontario.

The samples were collected by David Hozjan, MSc., P.Geo. and Mathew Duffy, GIT. At each sample site, a pit was excavated into the C-horizon of the post-glacial soil profile, typically to a depth of 0.5-0.8 m, to reach minimally oxidized, structurally compact till, the subglacially deposited variety that is required for an effective survey.

The till from each pit was sieved at 8 mm to obtain approximately 12 kg of -8 mm material which, when further screened in the laboratory, typically yields approximately 10 kg of -2 mm fine sandy silt, the particle size fraction in which most gold grains reside.

Prior to extracting the heavy mineral fraction from the samples, ODM removed a representative 500 g split and further sieved it at 0.063 mm to separate the fine silt + clay fraction. This fraction will be analyzed geochemically in Kamloops by Actlabs Ltd., a laboratory certified as ISO/IEC 17025 Accredited (Lab 790) by the Standards Council of Canada. The samples are digested in aqua regia, then analyzed by FA/AA for Au and 34 other elements by ICP/OES. ODM normally includes in each submitted sample batch one or more splits of a blind (visually indistinguishable) quality assurance sample from a natural till section that contains consistently elevated levels of Au, Cu, Mo and other key elements.

Heavy mineral concentration was effected on the bulk of each sample using a shaking table modified by ODM to recover the fine, silt-sized gold particles that normally comprise 95% of the gold grains in till. The dimensions of each recovered gold grain were measured and the grain was classified as being still pristine, partially modified (physically deformed) or completely reshaped to gauge its relative distance of glacial transport. 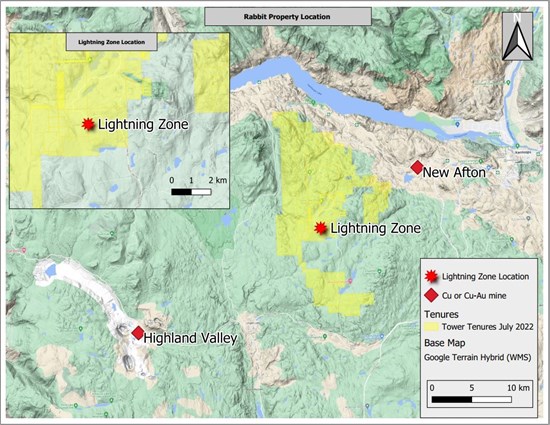 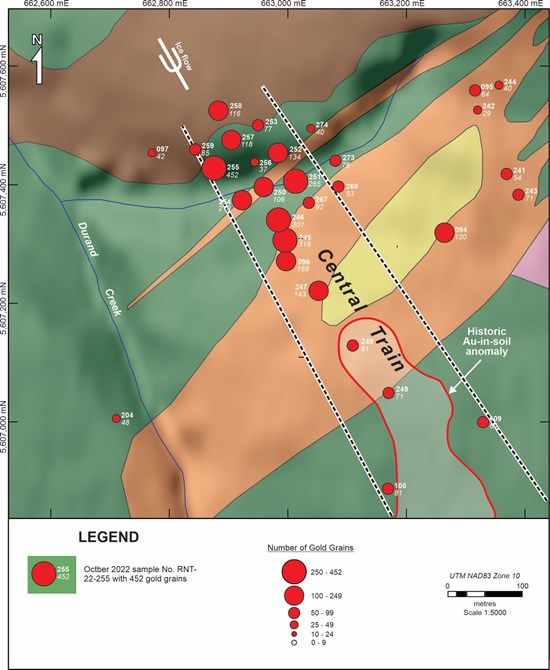 Figure 2 - Gold grain content the till within and near the Central Train. 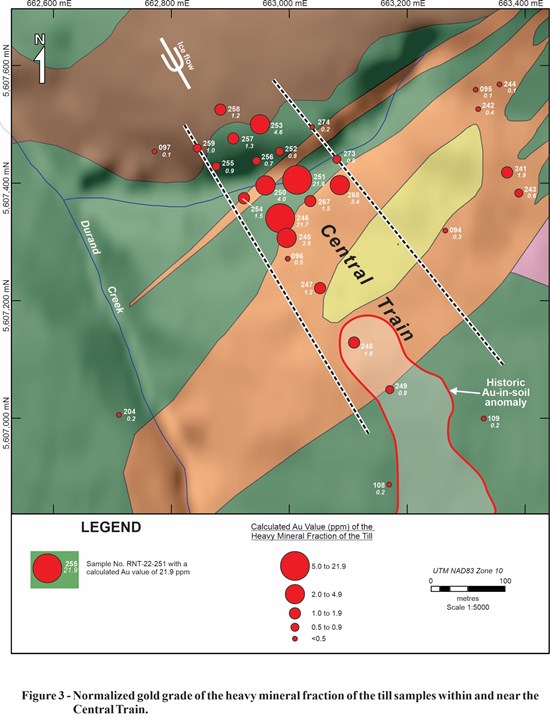 Figure 3 - Normalized gold grade of the heavy mineral fraction of the till samples within and near the Central Train. 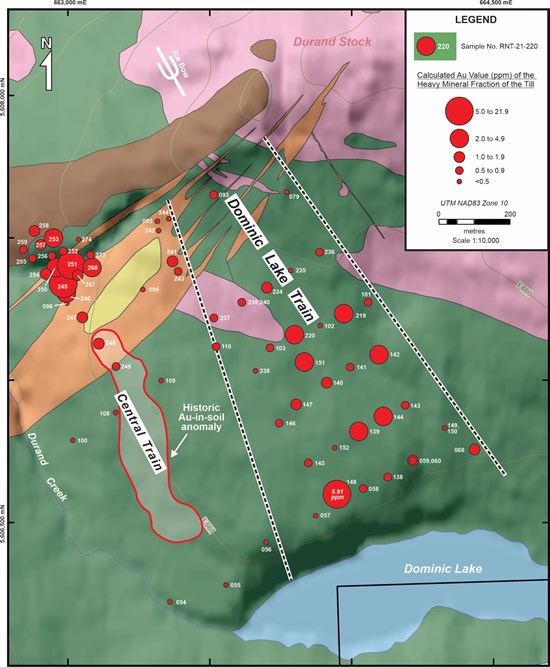 Figure 4 - Normalized gold grade of the heavy mineral fraction of the till samples within and near the Dominic Lake Train. 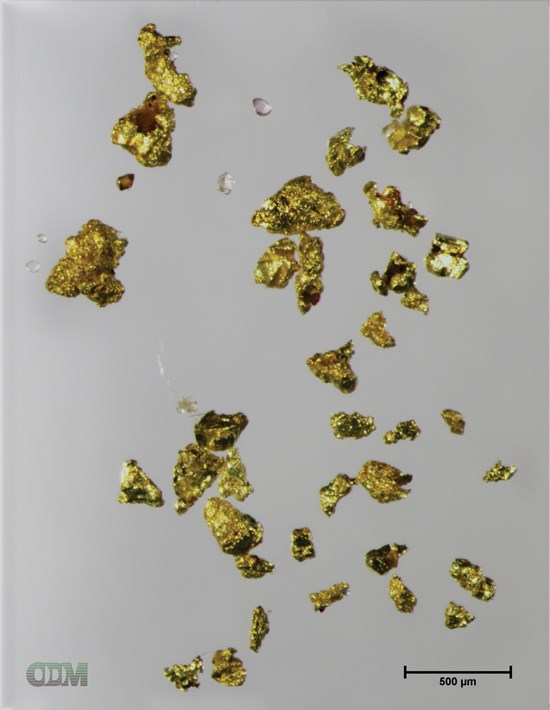 To view the source version of this press release, please visit https://www.newsfilecorp.com/release/145224