The four holes, RN21-024 to 027, were exploratory holes drilled in December, 2021, to probe a 300 m prospective corridor for the source of the strong Dominic Lake gold grain dispersal train (see Fig. 2) which had been outlined in the glacial till that covers the bedrock (see Tower's November 12, 2021 press release). The third hole, No. 026, was successful, intersecting a visibly pyritized shear zone that subsequently assayed 1.40 g/t Au over 95 m, including 19.2 m of 4.21 g/t Au (see Tower's January 11, 2022 press release) and has been christened the Lightning Zone. The fourth and final hole, No. 027, was drilled from the same pad with the hope of hitting the zone from a different angle.

The complete Au and Cu analyses for discovery Hole 026 are shown in Figure 3. As seen, the Lightning Zone is Au-rich but contains little Cu because the only sulphide mineral associated with the Au is pyrite. However a 15.0 m zone averaging 0.27% Cu and 0.39 g/t Au was intersected at the bottom of the hole. The Cu and Au grades of this zone are typical of the widespread porphyry-type mineralization that is associated with the nearby Durand Stock.

Hole 027 did not hit the Lightning Zone as planned because the hole was based on a presumed southeast strike whereas the new delineation holes indicate that the zone strikes northeast (see Fig. 2). However, the hole did intersect two parallel footwall zones northwest of the Lightning Zone that yielded 1.32 g/t Au over 9.7 m and 2.09 g/t Au over 5.2 m despite containing only 1 to 5% pyrite. As noted in Tower's May 03, 2022 press release, visually similar footwall mineralization was intersected in some of the new delineation holes.

Holes 024 and 025 were drilled blindly before the Lightning Zone was intersected. They encountered porphyry-prospective diorite of the Durand Stock (see Fig. 2) rather than the sheared volcaniclastic country rocks that host the Lightning Zone. While the infill assays were helpful in delineating the wide zone of porphyry Cu-Au mineralization that was encountered in these holes (e.g. 79.8 m of 0.09% Cu and 0.31 g/t Au in Hole 025; see Tower's March 10, 2022 press release), they are not relevant to the Company's current focus on the Lightning Au zone.

The drill core was logged at Tower's leased, fully equipped core facility near Kamloops under the supervision of Matthew Husslage, P. Geo. and Dane Bridge, MSc., P.Geo., both of whom have extensive experience with shear-hosted gold deposits and have previously worked on the Rabbit North property.

The samples were analyzed for Au by fire assay and ICP-OES and for Ag and 36 additional elements by ICP-OES using a four-acid, near-total digestion. Any over-limit (>5 g/t) Au analyses were repeated using the same fire assay procedure but with a gravimetric rather than ICP finish. 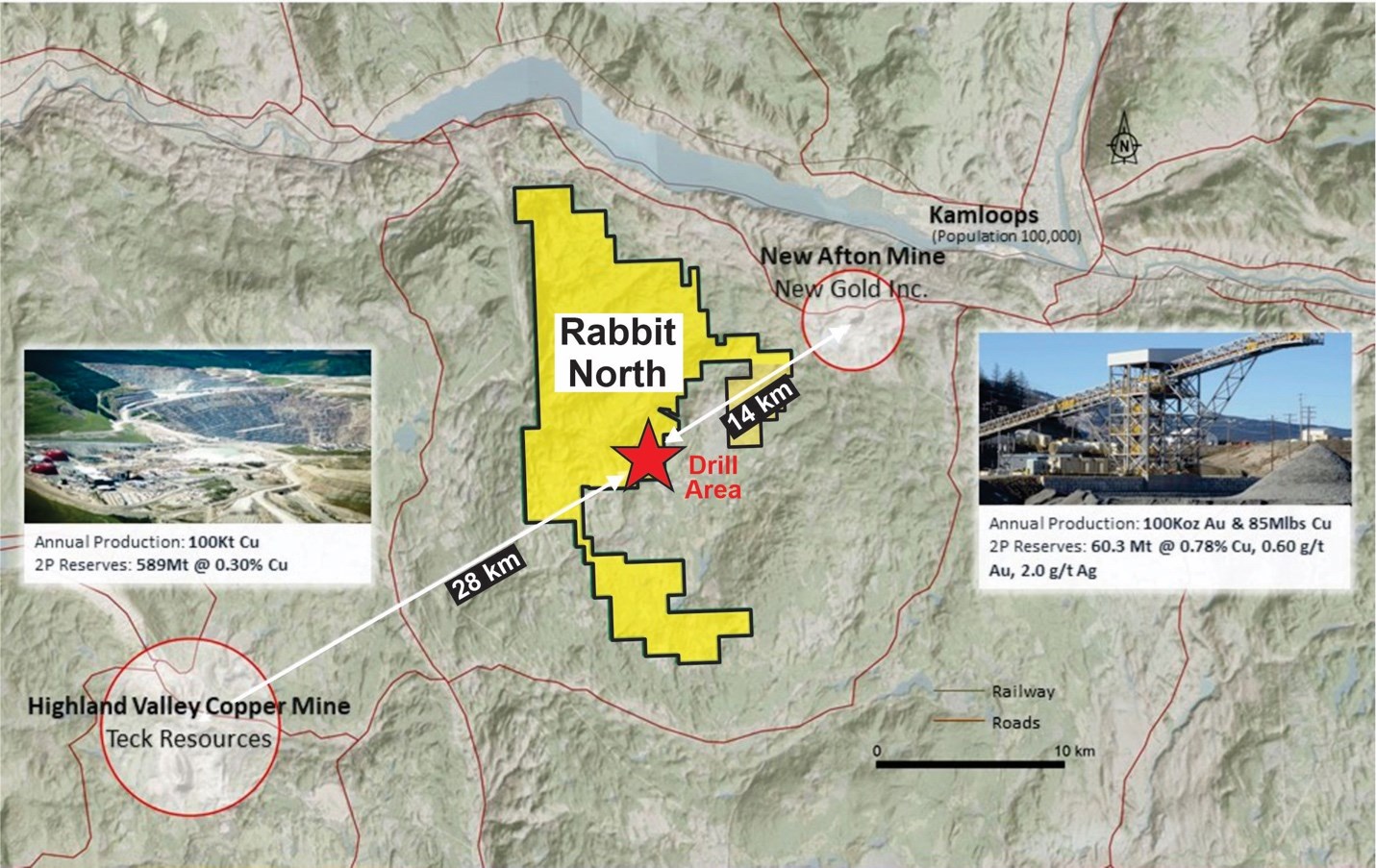 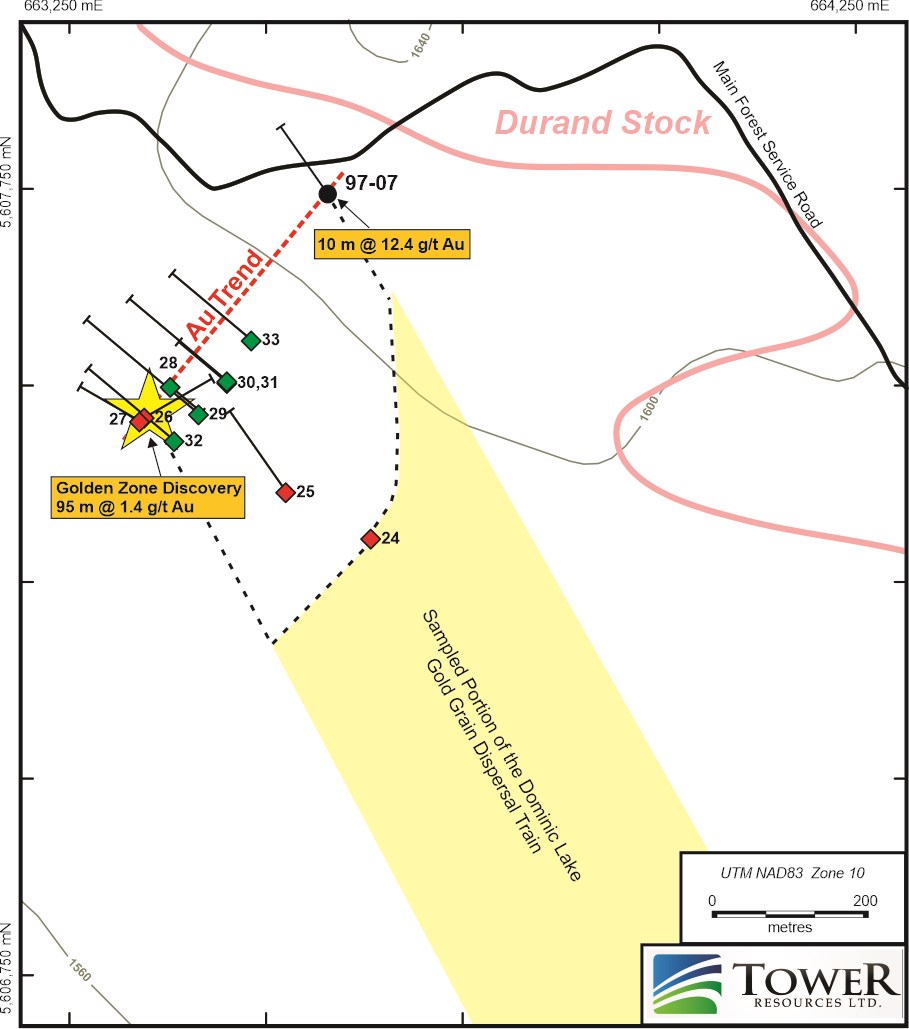 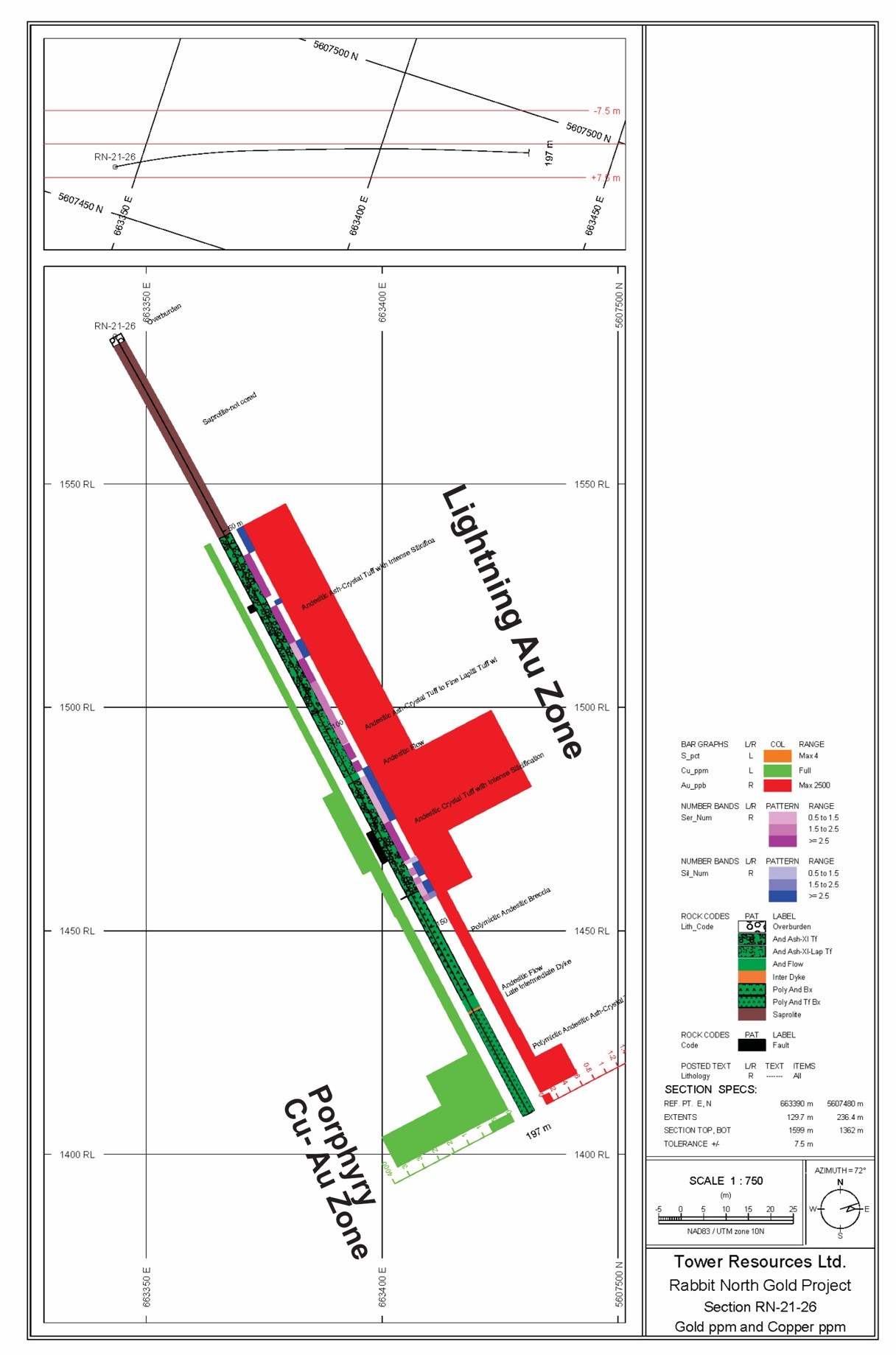 To view the source version of this press release, please visit https://www.newsfilecorp.com/release/126717