Approximately six holes will be drilled to determine the configuration of the substantial mineralized zone indicated by the impressive 1.40 g/t Au intercept over 95 m, including 19.2 m of 4.21 g/t Au, in discovery Hole RN21-026 (see Tower's January 11, 2022 press release) and test the first 100-150 m of the presumed northeastern strike extension of the zone (see Fig. 2).

Hole 026 was the third of four holes drilled in December 2021, near the head of an exceptionally strong, southeast trending gold grain dispersal train (see Fig. 2) in the thick glacial till that covers the bedrock. It was collared on the western edge of the 350 m wide dispersal train and drilled to the northeast toward the projected axis of the train. The heart of the gold zone is expected to lie further northeast closer to the axis of the dispersal train.

The main evidence for a northeast strike to the Golden Zone is that the fourth hole, No. 027 which was drilled to the northwest from the same pad as Hole 026, appears to have clipped only the top 30 m of the zone. In addition, a historical 1997 hole drilled 400 m to the northeast (see Fig. 2) targeting porphyry Cu-Au mineralization inadvertently intersected 10 m of high grade (12.4 g/t) Au mineralization.

In preparation for an extended drilling campaign at Rabbit North, Tower has leased a large, fully equipped core facility near the property to replace the temporary tent facility in Kamloops that was used previously.

Mr. Joe Dhami, President of the Company, commented: "Our goal with this round of drilling is to get enough solid cuts through the Golden Zone to determine its shape and orientation, as having this information is key to placing our next holes effectively. The drilling program will benefit immensely from having the use of a large, well equipped core facility where our dedicated team can comfortably log several holes at once and display the core for accredited visitors."

As noted in the January 11 press release and illustrated in Figure 2, Tower's till sampling did not extend far enough up-ice to the northwest to locate the bedrock source of the gold grains. Therefore the December drilling started with Hole 024 at the limit of sampling and progressed northwest until the gold source was intersected in Hole 026, 300 m up-ice. However Hole 025, which was drilled northwest along the axis of the gold dispersal train toward Hole 026, did encounter some significant mineralization. Near the top, Hole 025 cut a long interval of mineralized diorite that, excluding two post-mineralization dikes with an aggregate thickness of 7.5 m, averaged 0.09% Cu and 0.31 g/t Au over 79.8 m. This Cu-Au occurrence is 150 m southwest along strike from a known porphyry-style mineralized zone that Tower identified in Hole 021 in 2017 (see Fig. 2) with a 133 m intercept averaging 0.19% Cu and 0.31 g/t Au.

While averaging 0.31 g/t, the Au assays for the 54 samples from the Cu-Au zone in Hole 025 were all below 1 g/t. Paradoxically, the core further down the hole, i.e. closer to the Golden Zone, was analyzed only intermittently yet four samples returned Au values over 1 g/t with no associated Cu, a characteristic feature of the Golden Zone mineralization where the Au is associated with pyrite rather than Cu-sulphides. This suggests that if Hole 025 had been drilled deeper it would have intersected the Golden Zone.

Hole 027 was completed on December 17th and the field crew left on the 18th for their scheduled Christmas break. As a result, and also because it had become impractical to log core in a tent as winter set in, much of the core from this hole, including the visually interesting but badly broken and difficult-to-cut top 30 m, as well as some core from the other three holes, has not yet been logged and assayed. Tower plans to log and sample the remaining core in the new core facility prior to drill start-up.

The technical content of this news release has been reviewed and approved by Stuart Averill, P.Geo., a Director of the Company and a Qualified Person as defined by National Instrument 43-101. 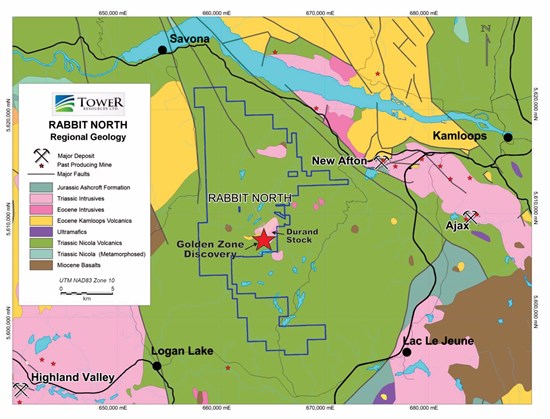 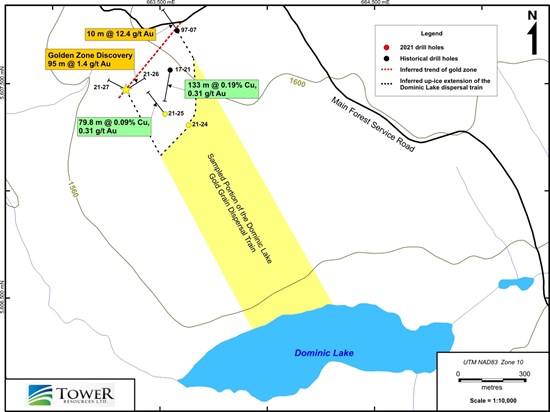 To view the source version of this press release, please visit https://www.newsfilecorp.com/release/116255