The road-accessible Rabbit North project comprises approximately 16,400 hectares in the infra-structure-rich copper and gold porphyry belt of southern British Columbia. The producing New Afton copper and gold mine is approximately 14 kilometres east of the main Rabbit North targets; Highland Valley Copper Mine operated by Teck Resources Ltd is located 28 kilometres to the west.

President Mark Vanry states, “Drill hole RN17-15 returned the most significant drill intercept to date at Rabbit North. The copper and gold grades are comparable to those found in some the of highest quality porphyry deposits in BC. Tower plans to continue aggressive exploration at Rabbit through the remainder of 2017.”

*Width refers to drill hole intercept. True widths have not been determined.
**Copper Equivalent (CuEq) is used for illustrative purposes, to express the combined value of copper and gold as a percentage of copper. No allowances have been made for recovery losses that would occur in a mining scenario. CuEq is calculated on the basis of $2.65 per pound of copper and $1250 per troy ounce of gold, using the formula:
CuEq = [(%Cu)(22.0462)($lbCu)+(gptAu)(1/31.1035)($ozAu)]/[(22.0462)($lbCu)

Drill hole RN17-015 was drilled in the Western Magnetite Zone (WMZ), an area of copper and gold porphyry mineralization predominantly hosted in Nicola volcaniclastic rocks on the western edge of the Durand stock, a Late Triassic monzonite to diorite composite intrusion. The drill hole was collared 180 metres southeast of 2016 drill hole RN-008, which intersected 200 metres of 0.30% Cu and 0.15g/t Au including a 72m interval of 0.47% Cu and 0.20g/t Au (see Tower’s Press Release dated December 8, 2016).  Drill hole RN17-015 is considered a substantial step-out from RN-008 and thereby expands and upgrades the zone of known porphyry related mineralization at the Western Magnetite Zone.

Mineralization in RN17-014, RN17-013 and RN17-012 starts at the top-of-bedrock in all holes and consists of chalcopyrite and pyrite occurring in veinlets and as disseminations typically replacing mafic phenocrysts. Alteration consists of moderate to strong sodic and inner propylitic assemblages overprinting host Nicola Group volcaniclastic rocks.

Alteration at the Western Magnetite Zone is predominantly magnetite-destructive; thus, the 2017 drill program was designed to test priority targets within a 500 by 1500 metre magnetic-low geophysical anomaly. This priority target area is located between RN-008 (WMZ) and the historically identified Chrysocolla Zone.

Drilling is ongoing at Rabbit North and Tower is awaiting the remaining assays which are expected over the coming weeks.

Subsequent to the completion of the current phase of diamond drilling, further exploration over the 2017 season will be focused on systematically exploring untested, till-covered areas of analogous geology and geophysics to the south, north and northwest of the 2017 drill holes. Utilizing key observations made through 2016 and 2017 drilling, highly prospective areas of low magnetics and moderate chargeability, within Nicola Volcaniclastics proximal to the Durand stock, will be worked up in order to delineate additional drill targets outboard of the Western Magnetite Zones.

Drill core samples - generally 2 metres in length - were split at Tower's core logging facility in Kamloops, BC.  Samples were prepared for analysis and analyzed at Activation Laboratories (ActLabs) in Kamloops, BC, an ISO/IEC 17025 Accredited (Lab 790) by the Standards Council of Canada. Samples were analyzed for gold by fire assay and ICP-OES and for 37 further elements, including copper, by ICP-OES using a four-acid, near-total digestion. Overlimit (>1%) copper analyses were repeated using the same procedures but at a higher detection range. QA/QC samples including blanks, standards and duplicate samples were inserted regularly into the sample sequence at a ratio of approximately 1:10.

The technical content of this news release has been reviewed and approved by Paola Chadwick, P.Geo., Exploration Manager for the company and qualified person as defined by National Instrument 43-101. 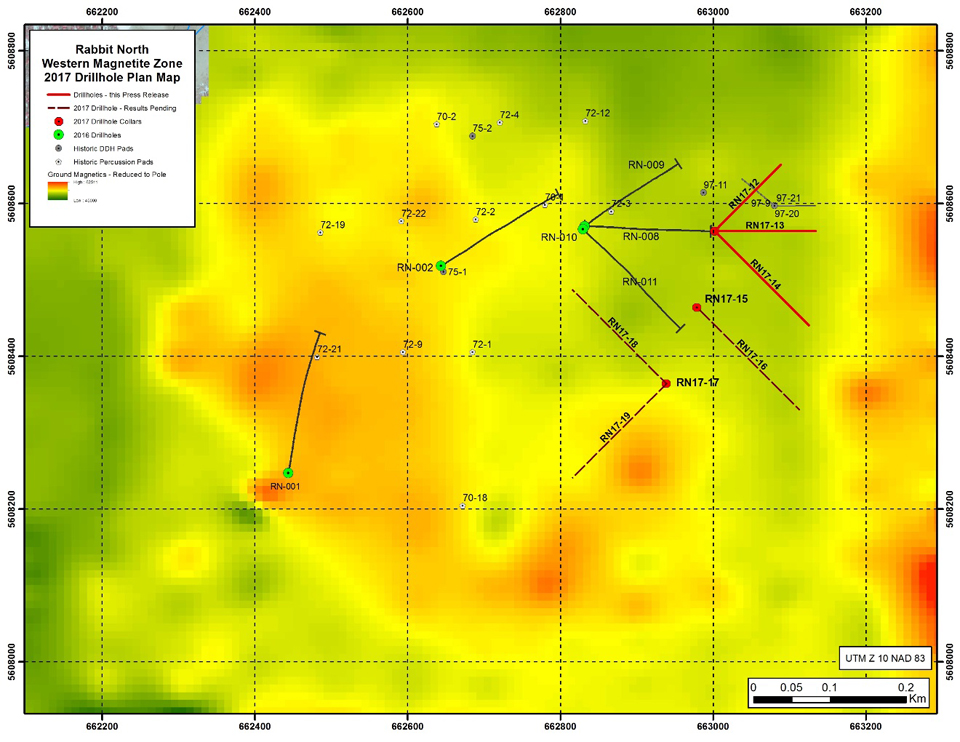 Forward-Looking Statement Caution
This news release contains certain “forward-looking statements”, as defined in the United States Private Securities Litigation Reform Act of 1995, and within the meaning of Canadian securities legislation. The Company cautions that forward-looking statements are based on the beliefs, estimates and opinions of the Company’s management on the date the statements are made and they involve a number of risks and uncertainties.  Consequently, there can be no assurances that such statements will prove to be accurate and actual results and future events could differ materially from those anticipated in such statements.  The Company undertakes no obligation to update these forward-looking statements if management’s beliefs, estimates or opinions, or other factors, should change, except as required by law. There are numerous risks and uncertainties that could cause actual results and Tower's plans and objectives to differ materially from those expressed in the forward-looking information. The reader is urged to refer to the Company's public disclosure which is available through the Canadian Securities Administrators' System for Electronic Document Analysis and Retrieval (SEDAR) at www.sedar.com for a more complete discussion of such risk factors and their potential effects.